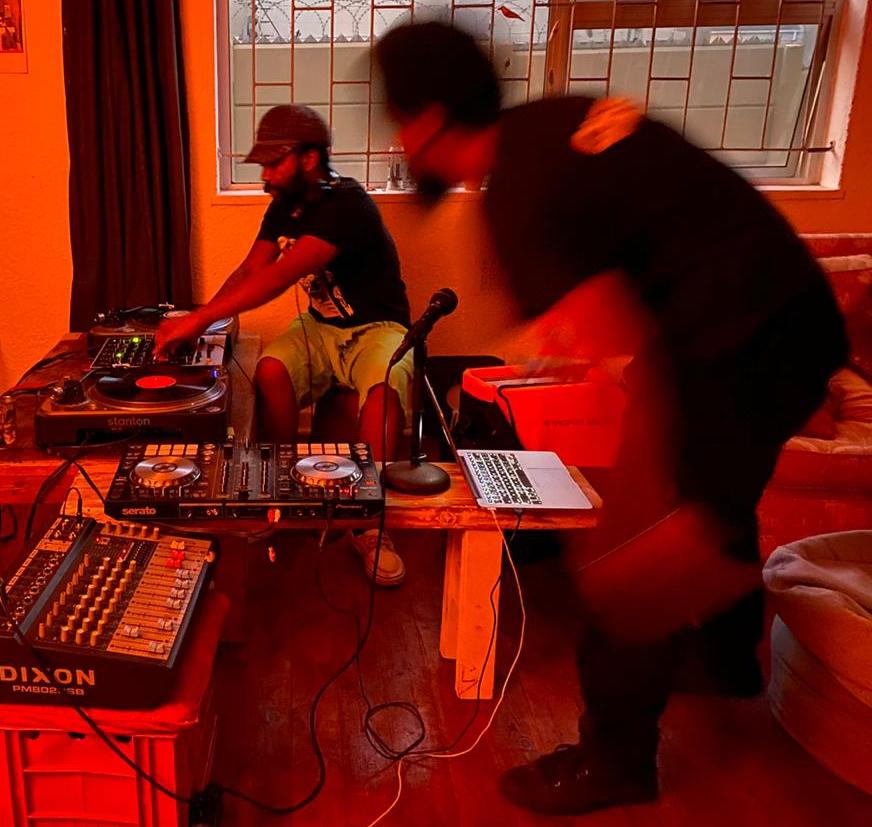 Feelings Radio Project (FRP) is a pop-up radio and performance experiment making use of music, sound-collage, improvisation and open dialogue to investigate and “get in our feelings” about a range of issues in the contemporary South African and larger global context. Hosted by record collector and DJ Joey Modiba (aka Lirubishi) and performer-conductor Malik Ntone Edjabe (aka Hypocrite), it takes the form of episodic online broadcasts, intimate musical gatherings and larger dance-oriented events.

The project draws substantially on Freespace, a performance format, pedagogic device and set of philosophical principles developed by People’s Education, seeking to provide an open platform for spontaneous transdisciplinary creative interchange, and placing an emphasis on the breaking of intergroup boundaries, such as the audience/performer and participant/facilitator relation.Typically featuring guest thinkers and practitioners from diverse disciplines, and driven by an ethic of interactivity, FRP sessions come together as situations of organic collaboration where sound is given precedence as the core artistic output.

FRP also speaks to the visual, however, especially given that sound is constituted of movement, and often translates to it in the form of dance. Events and broadcasts are intermittently accompanied by video material offering insight into the ideas and impressions which inform a given session and the project as a whole.

Sorcery! is a party dedicated to the power of sound and spirit, bringing together selectors, performers and conductors in a unified act of celebration. FRP has collaborated on the event with of groups and individuals within a wider community, namely Breaking Bread, drummer/percussionist Bonolo Nkoane and DJs Neil Gain and Othusitse Mabi.

Brought to you in collaboration with Breaking Bread and hosted by A11 Radio, this interactive online broadcast investigates the meaning of freedom on the 26th anniversary of South Africa’s first post-apartheid elections and a month after the country went into a coronavirus lockdown.

Brought to you in collaboration with our dear friends at Cafe Ganesh, Essential Services is a bimonthly event dedicated to upholding the essential importance of music in our everyday, pandemic-ridden lives.

These sessions form part of an ongoing series of “recruitment parties”, whereby trained Secret Ninja Society (SNS) recruitment agents exploit sound and radio infrastructure to propagate a rebellious Ninja belief system and persuade listeners to enlist themselves in the SNS cause.

“The Ninja are a mysterious warrior elite said to be so spiritually advanced they know the mind and will of God. Regarded with awe as masters of invisibility and ‘warriors of the shadow-self’, their legendary skills include the ability to command the elements and transform themselves into Fire, Water, Air, Earth, and Void — the nothingness from which all things stem. Central to Ninja philosophy is the understanding that there is no higher power than the actualized human being. The Ninja believe there are four gates to freedom, and to pass through them we must overcome four initiatory ordeals. Succeeding at these enables us to combat fear, find true power, clarify our vision, and overcome the soul fatigue that is at the root of our personal and social problems.” — Ross Heaven

My Whole Body Changed Into Something Else

These sessions were held as part of My Whole Body Changed Into Something Else, a group exhibition at Stevenson Gallery (Cape Town) curated by Sisipho Ngodwana and Sinazo Chiya. The title of the exhibition is drawn from a quote by Sun Ra, in which the artist, thinker and composer describes a moment of abduction and renewal.

Rude Boiz Consortium is a short documentary film about the origins of Feelings Radio Project, and it’s development into a larger crew of chaos-mongering DJs and music enthusiasts with an ambiguous reputation in the Mother City’s music and nightlife scene. It is an intimate story about freedom, self-expression, collectivity and disruption of the status quo.